When I was seven or eight my mom won a riding lesson at Flintridge Riding Club which was, incidentally, the swankiest place to ride in the LA area.

I wore a purple Lion King t-shirt and white leggings, because that was the most rider-y getup I had as an eight year old. Here I am now, twenty two years later, writing a horse blog.


I digress. The point is, things have changed a lot since that first lesson I took (On Chauncey. The horse's name was Chauncey). Then I decided I wanted to do a series on stuff I used to think was cool and so, so isn't cool anymore. I very distinctly remember things I idolized as a kid and wished I could buy, but I didn't have a horse or I didn't have money. 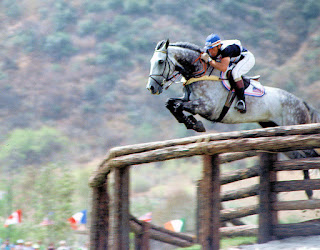 So this 'series' (we'll see how that goes) is dedicated to nine year old, twelve year old, and sixteen year old Megans, who hid under the blanket with the original State Line Tack catalog and a highlighter and made a wishlist of things for a horse she was years away from.

The first thing I remember wanting when I was young was a pair of Ulster boots. I remember the riders at the lesson barn I was at, who actually jumped, had pairs of these. I still took group lessons that consisted of following the person in front of you and trying to remember the correct diagonal, so I was far from needing boot protection for a horse. But I still coveted them...


I'd hang on the rail and watch this woman with a dapple grey mare (my dream horse) zip on those plastic boots before she went out to jump giant fences. I'm pretty sure by 'woman' she was actually in her early twenties, and the 'giant fences' she was jumping were 2'6". But I still idolized her.


And while I realize they're totally impractical, and probably went out of style for a reason, I saw a pair of Ulster's on eBay for $8 shipped... and I bought them. Because even if I only put them on a once, I think nine year old me would've squealed with delight.