Contact (or: I've Been Doing it Wrong my Whole Life)

This blog starts with a play along exercise so first, find a friend and a rein. Doesn't have to be a horsey friend. Go ahead, I'll wait.

Got your friend/spouse/random stranger to play with you? Awesome!

Each of you grab the rein. Both of you pull until you get the tension you normally think you should have when you have 'good contact'. For most of you, it'll feel pretty strong. Probably a couple pounds of weight. Ahhh yes. Contact. We has it. (If it's not a couple pounds shut up, you're special and you don't need this exercise).

Now we're going to pretend your hand is the horse's mouth. Have your innocent bystander roll their knuckles, like the inside hand here: 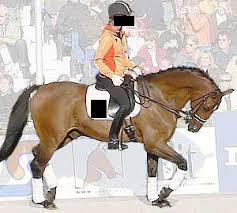 Pretty intense, right? That's a lot of force. On your horse's bars and tongue. If the friend you convinced to play along is also a horse person, do the same to them so they can feel it. Or do it to your poor unsuspecting SO if you want to pull them off their feet. I mean, what?

Both of you hold the rein but neither of you pull. Hold just enough tension that there's no or very little slack between you. Hold the rein firmly but without clenching your hands. Ask your partner to close their fist. You can feel it, right? If you can't feel it you're still holding too much tension between you. Try again. Ask them to close and open just one finger on the reins. You can feel the movement of just one finger.

My whole life, I've been told that contact is weight. I've ridden in pretty massive bits, with draw reins, and kicked the horse up into my hands until I've gotten the weight I felt I was supposed to have. But that's not contact. That's not 'on the bit'.

I think of it now like a telephone made out of two cups and some string. You need to hold it taught enough to get tension that will transfer vibrations down the string, but if you pull it too tight the string will rip out the bottom of the cup (ask five year old me how I know).


That's what the double bridle is really for. It's so you can have that feather-light touch and send more complicated instructions. It's like the difference between writing in binary and using the modern alphabet.


Horses are nice, so they go along with whatever terrible shit we throw at them. Unless they're Spicy, in which case they want to go along with it but they're also busy having a nervous breakdown so sometimes they just Can't.

It's been a pain but I've restarted training the halt (again). But now instead of holding on to ten pounds of contact I just take up enough rein so there's no slack. When I squeeze my fingers and sit up tall, he skids to a halt.

Here's the caveat you've been waiting for: I'm not saying bits are terrible and we should all ride bitless. I'm not saying you're a monster for riding your horse in a gag bit with a figure 8 so you don't get run away with on cross country. There are a million ways to ride a horse: ask two horsewomen their opinion and you'll get five answers. Probably more than five answers. So don't go and throw out your running martingales and elevators and hackamores and whatever else you ride in. Those are your tools and any kind of change is just that: change. It will take work and time to get there, if it's even something you want.

All I'm asking is for you to hold the rein gently with a friend and feel what contact could be like. If you're anything like me, your curiosity will be piqued and the rest will take care of itself. 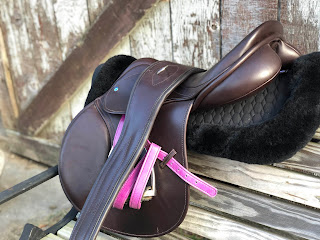 Thought Experiment: You Can Only Keep 10 Pieces Of Tack