While I was busy getting my mind blown by how blind horses are, you are probably wondering what Spicy was up to. He was busy wearing a track stall walking in my borrowed stall. I was at a loss of what to do, watching him run in frantic circles and spraying sawdust everywhere. The lecture was starting so I decided to just leave him and see what happened.
An hour later we took a break, and I crept back towards the stall to try and catch what he was doing without him noticing me. My lack of parenting paid off; I was pleasantly surprised to see him casually moving between eating his hay and peering out the Dutch door at his new neighbors.
I did my normal ground work and walking exercise that I complete every time I ride, and Spicy seemed pretty chill given all the changes. There were some demon animals near the ring (cows, llamas, guinea hens) that made him very looky, but for the most part the hamsters were on the wheel. Thus  began Bill's version of 'sacking out'. All sixteen of us formed up into a drill team and rode patterns in pairs. This isn't new to me; I played polo all through college and that's how we warmed up typically. But uh... Spicy isn't a polo pony. Riding him with other horses in the ring usually causes a lot of consternation (re: farting and bucking).
We started the drill and it almost immediately devolved into complete chaos. The horses at the front of the line were doing okay, but the back of the line was like the naughty back row of a classroom. To my utter shock, Spicy was not the most unhinged. At one point our partner flew sideways into us, then spun and raced backwards away from us. I just kept my thigh and butt relaxed and while Spicy got a little 'up' he didn't even jig.
After over an hour of some of the most chaotic drill team I've ever been apart of, we broke for lunch. The afternoon session started with walking over plywood and as the session progressed, Bill and his assistant started setting up more and more obstacles. Some horses had trouble navigating the obstacles, and Bill offered advice and ideas to help everyone through each obstacle.

Some horses had trouble. Spicy was not one of those horses.
To my utter shock, he walked through every set of pool noodles, crossed every bridge, and stood on a loose rein for our turn (somewhat) patiently. Bill uses a loudspeaker system and Spicy was unperturbed by the feedback from the speaker or Bill's voice shouting crackly instructions at us. He didn't mind the 'assistant' trainer, a German Shephard named Radar who was running around chasing dragonflies the entire time.

At the end of the session Bill really started to up the ante. He popped a smoke grenade and had us walk past it and through it. It was a huge plume and it smelled awful. Spicy did not understand why we would want to walk through it when we could clearly GO AROUND, but did as I asked anyway. The final challenge was a police car, complete with lights and sirens. Spicy had no issue with this ei, and at one point was walking around it on a loose rein while I had a finger in my ear because of how loud it was. 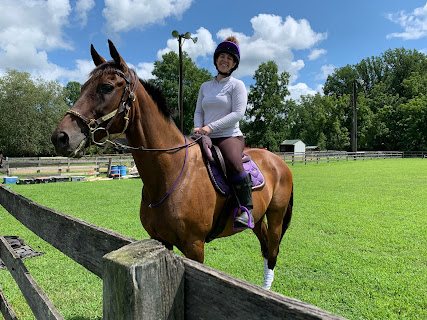 How to Calm the Anxious Horse