Baby's First Autumn (With Me, Anyway)

It's been a few weeks since I've updated specifically about Runkle. Mostly because what we're doing right now hardly requires weekly updates.

But when I think about our progress over the last few months I'm not just amazed at how much more he knows but how much more we know each other. Most of the horses I've ridden were someone else's baby, and I was just an add on very late in their career. What Runkle knows about his new life is purely me. I've been riding far longer than he's even been alive and watching him get to know me and his new career has made me happier than I thought it could.


For example, I've watched him become a total treat hound. This horse has learned alarmingly quickly that pockets almost always have food in them. The day I bought him I tried to give him a mint and he had no idea what to do with it. Carrots were a bit easier for him to grasp. But now he knows if I have something in my hand or my pocket it is not only probably edible, but definitely for him. He even meandered over to the garbage can while I was clipping my helmet once to inspect the not quite empty donut box sitting on top. 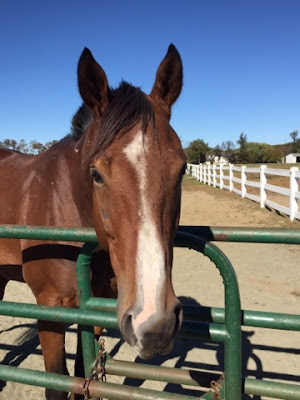 When he's in a grumpy, petulant mood he 'forgets' how to turn left. Usually I'm responsible and do some counter bending to prevent any accidents but I'll admit that on at least one occasion I've kept my leg on and been like "FINE, if you don't want to turn you'll find out yourself that there's a wall there."

Which brings me to point three, which is when I do this he usually stops at the wall and admires his own reflection in the mirror. He actually does this quite a lot. I'm not sure if he thinks it's a cool new friend or if he's just checking out how great he looks with a topline but I definitely have to keep his mind on the ball or he'll just trot around staring at himself. 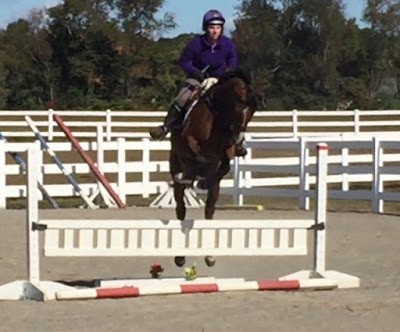 I don't think scope is going to be a problem.

If I hadn't seen footage of this horse doing hurdles I would never have guessed it. He doesn't drag me around to the jumps. I can actually put an astounding amount of leg on him and even then I still have to give him a little tap with the stick to convince him to actually move out and not bounce up and down like a carousel horse. And then one day he refused a tiny two foot stone wall because I asked for a slightly long distance! "Nope," he told me politely. "I don't have to do that anymore. I get right up under the jump, thank you very much." 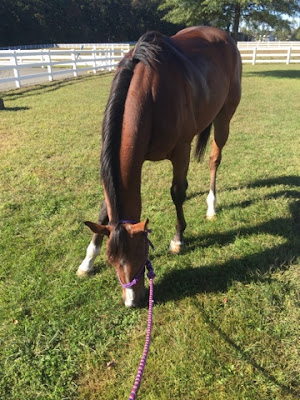 Still only an amateur grazer, but working on his full license.

But mostly it's just beautiful having my own horse. The other day I turned him out and after he was done getting fantastically muddy, instead of buck-farting and running off to his friends he meandered back to the gate where I stood watching him. He wanted head scratches. He stood there for ages with me, turning his head and neck every way possible so I could get all the itchiest, muddiest, places. And it made my heart swell to know that I chose him and he is mine, and he is beginning to choose me. 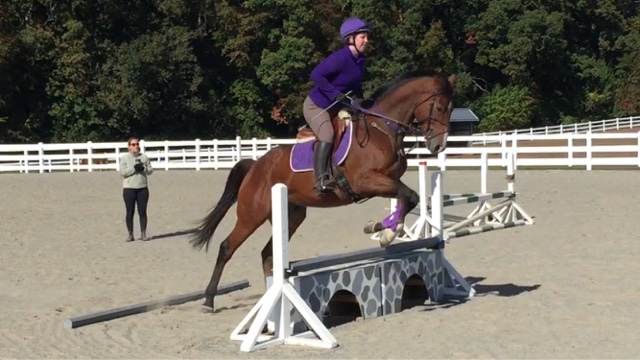