Side Effects May (Hopefully!) Include...


The reframing of my training mentality was centered around riding. Most people who own a horse do so to ride, so this isn't surprising. While the riding has progressed, there have been several secondary and tertiary benefits I've reaped in addition to having a more rideable horse. 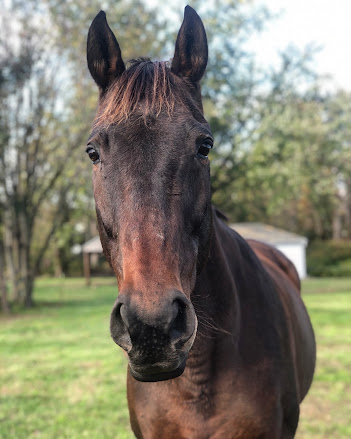 He's happy to see me. If you've been reading Spicy and my tale for a bit, you know I struggled with catching him for a while. There was a period where no one could catch him, which was followed by a period where only I couldn't catch him. Seriously. I used to hide in the barn and send Sara out to get him while I peered through a dirty window to make sure she put the halter on right side up.

Now, when he sees my car, he meanders to the gate. If it's a particularly nice day, he might wait until I call him. A few weeks ago I went backpacking with the truck and left my car at the barn in my normal parking spot. We were gone for four days, and when I got back my barn owner said Spicy spent the majority of the trip standing at the gate, probably wondering what the hell I was doing in the tack room for so long.

He enjoys grooming. I attributed Spicy's grumpy faces to being a typical thin-skinned OTTB. Grooming was purely utilitarian, not a bonding or enjoyable experience.
Since our retraining, this horse loves grooming. I mean, really loves. No, really. Like it's turned into an uncomfortable activity for me. He gets, uh, happy. Then enjoys himself being happy. His head gets really relaxed and sometimes he drools. He has displayed preferences for certain brushes at certain times of year (he prefers the Tigers Tongue in summer, and the curry on his winter coat). Lately I've actually been wondering if he gets filthy on purpose.

He ground ties. I may be taking too much liberty with this one. I need to remind myself that uh, ground tying is not the same as actually tying him to something so I shouldn't wander off and set up trot poles. Not that he'll leave, because I have definitely done that and he hasn't, but it's probably not safe. It's really nice having a horse that does that reliably though!

His personality came out. I almost said changed but, he didn't change. Initially, I would have described Spicy as anxious and flighty. A month in, a different horse started to emerge. He was cheeky and curious. Successfully navigating tasks I set for him, and receiving praise for it, made him happy and proud. He was playful. Not just with me, but with other horses too. 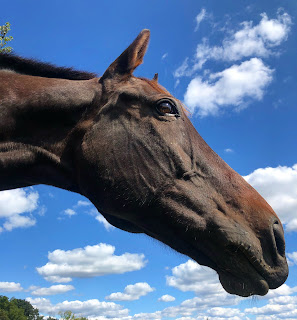 So much of what makes horses successful is having structure. That's why horses in professional programs do so well. Just because you're a backyardigan doesn't mean you and your horse can't have it too, though. Structure and boundaries aren't limitations on your horse, they are creating a safe space for him to express himself. It allows them to thrive.
Labels: spicy training 'tips'?