First of all, I want to apologize for not having a single picture or video of this event. At this point in my blogging I don't have a photographer following me around capturing every brilliant moment Runkle and I have, but someday when we make our Big Break I'll just steal our pictures off of Eventing Nation.

Until then, you'll have to deal with me coercing my father or kids from the barn (psst, any takers?), or re-enacting with stock images available on the internet. Today will consist mostly of the latter. 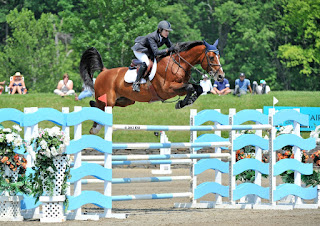 Jump size not to scale.

Runkle was a steeplechase horse, so he knows what a jump is. He knows that he has to run over as fast as he can, hurl himself over, and upon landing gallop off to the next one as quick as his little legs can carry him. Given that's all he knows, he's naturally great at balancing himself.

I wasn't really sure how our first jump lesson would go. His first week at the farm I introduced him to the jumps in the ring, expecting him to blow and snort at them like he did at the watering can the first night he came to Bit O Woods.

He didn't, though. He rubbed his nose all over the roll top like it was his best friend. He inspected the chevron and wasn't too impressed by it. My favorite was when I introduced the liverpool. I was sure this would be our bogie. Horses hate tarps; the color, the sound it makes when you kick sand on it, the inevitable pit of snakes its covering. I directed him to it and he shuffled over absolutely spraying it with dirt. I definitely flinched and grabbed the neck strap, waiting for him to explode at the noise. Instead he snuffled the hard wooden edge and picked it up with his mouth!

I was so surprised it wasn't until I heard the sound of the tarp starting to give way that I said "HEY, DROP IT!" And like a dog with a slipper he sheepishly dropped it right at his feet. He had moved it about a foot.

Okay, so he knows jumps aren't scary. Cool. Walking around them and picking them up in his mouth are one thing but he has to learn to go over them as well. 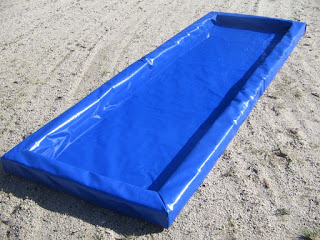 The warm up for our first real jump lesson went well enough. I have to constantly work on his softness and not letting him get tucked behind the bridle but go into it. We trotted our first jump, a teeny tiny little crossrail, and he hopped over it no big deal. We went back and forth over it a few more times. Every time he got more confident, and as he got more confident he tried to go faster. Instinctively, I clutched his face to try and slow him down at which point he tucked his nose to his chest and took away almost all of my control.

My trainer spent the rest of the lesson teaching me to let go. He was leaning on the bridle, and that's a problem that has to be corrected for sure, but he can't lean unless I give him something to lean on. It went against all my instincts but I had to give my four year old off the track thoroughbred his head and use only my seat and legs to tell him where to go and how fast to go at it.

I think it's a testament to how much I trust my trainer that I didn't laugh in her face and dismount when she told me to do this. I've been working with her for a long time and she really 'gets' me so I know she wouldn't ever ask me to do something she didn't think I could do. Pro tip: if you're going to push yourself that far outside your comfort zone you need someone like that in your corner.

To help my cause she set up a small gymnastic exercise. She put trot poles on either side of the crossrail and then a tiny oxer four strides away from that. 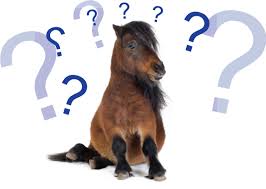 I don't know what to do with all my legs.

The first time I came to the exercise Runkle was absolutely flummoxed by the amount of poles in front of him. I didn't quite press enough so he stopped at the first jump, clearly thinking Surely, this is some kind of mistake. There are about twelve rails here and they're all over the ground and everything!!


The second time I was a bit more insistent, and he jumped it. In the loosest sense of the word jump. I wish I had a video of this because the crossrail was about 18" and he managed to take down not only all the rails but both standards as well. I kept my leg on and he wobbled on down to the other jump and cleared it perfectly, although he did have his head down pretty far so he could stare at it. 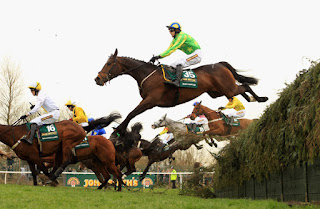 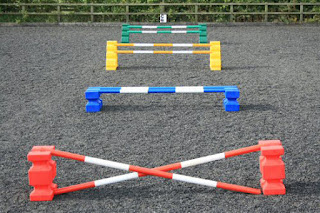 WHAT THE ACTUAL HELL.


Well, baby's first related distance!! Anything he does that is even remotely correct makes me so happy. And the more we ran through the exercise the more confident he felt. It was incredible to feel him figuring it out underneath me. He wasn't just sorting out the exercise, but he was figuring out who I was. His little black tipped ears would flick back to me on the way to the jump, double checking if I was sure, if I was sane, if I knew there were poles laying all over the ground. And when I put my leg on his ears went forward and he gave it his best shot.

The last time through the exercise he trotted through, jumping the crossrail easily, and landed cantering. He moved up fluidly to the oxer and gave me a fantastic jump where I actually felt his withers come up!

I made a huge fuss over him like we just completed Rolex and he got so cute. He put his head down and had a little romp to himself, he was so pleased. This horse is going to have the most inflated ego in the barn, and I'm totally okay with it. 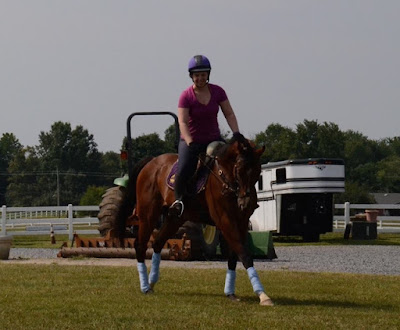