What They Taught Me: Gracia (Part 2)

This Part II of my post from two weeks ago, where I am merely a dedicated student and Gracia my professor.

My first lesson with Gracia was a disaster and an enormous success at the same time. The head trainer of the farm was teaching my lesson on her, and I so admired him that he scared the absolute shit out of me. I could not for the life of me remember so much as a course when he was around much less dig my way to a distance. Riding with him was a disaster.

They tossed me up on her back and I'm pretty sure I was shaking heading out to the ring. Gracia seemed totally unperturbed by my death grip on the giant bit in her mouth and she confidently walked into the ring and started warming herself up.

I say warmed herself up, because as I was trotting around the jumps were being put up, and I mean way up. The most I had ever jumped was about three feet and these were noticeably higher than three feet. I was directed to jump a 'small' vertical with a liverpool underneath to warm up. The vertical kept getting higher and higher. Poor Gracia; the higher it got the tighter I held the reins. At one point she was cantering in place because I had about a foot between my hands and her mouth and everything in me was going NO NO AND THRICE NO. 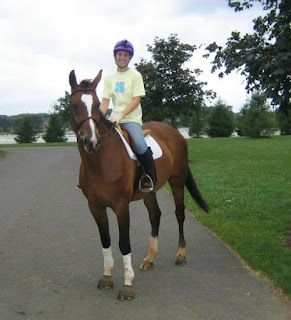 I was pretty cool back then.

My trainer told me to stop and had me walk over. He told me all she had done. She had competed in grand prixs across the US and in Europe. As she got older she was slowly moving down the levels so what we were doing now was nothing to her. Gracia snorted, relieved someone finally clued me in that there was absolutely nothing to worry about.

I was told to "ride like I knew what I was doing." 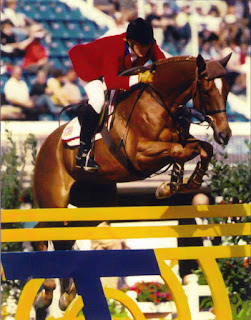 I went back out and pretended I was one of the riders I idolized at the time; Anne Kursinski or Margie Engle. Peter Wylde or Karen O'Connor. Suddenly we were jumping, really jumping. We did complicated combinations and even the big eight foot water jump! They were littered with mistakes, don't get me wrong, but Gracia bailed me out over every single thing and then some.

And so began our relationship. 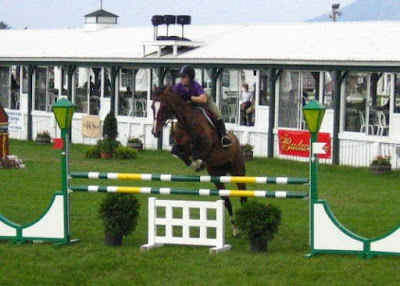 It was definitely one-sided at first, and we rarely brought home a ribbon. Three foot six still looked impossibly huge and I was always cantering down to the jump wondering what I was doing, what business I had hanging all over this horse's face or kicking off to the long spot.


I'm not sure when it happened but gradually I stopped being a passenger. I started really riding because I wanted to win, and I knew we could do it if I helped even just a little bit. The last summer I competed her we climbed up the ranks until we were winning every class we entered. It was an incredible feeling, to be able to win that much. Mostly because I felt like I was making it possible for us. Gracia could only get me so far alone; eventually I had to help. 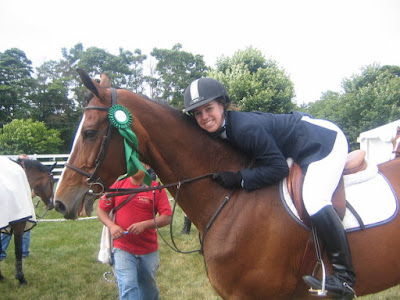 Unfortunately after just a year I had to say goodbye to her, and go off to college. But I wasn't that sad. She had given me so much, and now she was going to help another nervous rider. Unbelievably, she had more to give. That horse has the purest heart and most uncomplicated, straightforward mind. She knew her job, and knew it damn well.

So thank you, Gracia. For teaching me to be brave and competitive. Thanks for letting me get a blue ribbon more than a few times, and being patient until then. Thank you for turning the passion of a little kid into something real.
Labels: what they taught me