Bro, Do You Even Lift?

I don't want to believe cross training is important for horseback riding. I don't think anyone does, if we're all being honest with each other. You scrape together the barest amount of free time that you have to get to the barn and then collapse into bed at the end of a long day. Forget about making it to the gym. And running? You want me to run? When? At lunch? At the crack of dawn? No, no and thrice no. When I was younger I 'did' pilates. In that I laid next to my mom and flailed around while she did pilates.

And that's not even bringing up food. It's hard to eat healthy at horseshows when you're tempted by fried chicken, french fries, fried oreos, fried breakfast sandwiches. When I was lucky enough to compete at the Winter Equestrian Festival I was on a first name basis with the crêpe truck. Even if you're not at a show you tell yourself it doesn't matter what you eat, you're fit enough to ride your horse, and you went riding today so that was your exercise.

I didn't appreciate the value of cross training until this year. While I was in London I did get to go to a riding yard once a week but it was nothing compared to when I was in the States. Since I didn't have the opportunity to ride, I did other things; I got to play rugby, learn to powerlift and do a lot of yoga.

I planned a one week riding trip in Spain during my time abroad. It was one of the first trips I planned, when I was still in riding shape. Sure, I can control a spirited horse in open country. Of course I can handle 6-8 hours a day in the saddle. I didn't factor in that I planned the trip for the end of May, not in January while I was in riding shape.

We did the red route. NOT FOR THE FAINT OF HEART.

I was prepared for the trip to be a huge disaster for my body. I bought a ton of ibuprofen, icy hot patches and even a heating pad to help my dead legs and back deal with the fact that I hadn't ridden steadily in five months. I figured Spanish wine would help the rest. 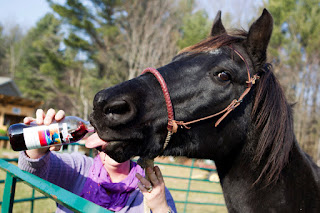 But every day of the trip I was shocked (by many things, but for the purpose of this entry, my fitness). I was sore, but no more so than usual. In some aspects I was stronger than I had been before. There was lots of saddling and unsaddling, tying up saddlebags, carrying buckets of water and grain or lugging baggage up hills. None of it was an issue. Sure on the last day my butt was more sore than I can express in words, but even on the day where we spent a solid 8 hours in the saddle, galloping and climbing mountains, I felt fresh and in control.

Before lunch, halfway through our eight hour day. Still smiling!

Despite not riding, the rest of my work had paid off.

I recently started working again remotely with my old trainer in London (Kevin). We're working on diet as well as an exercise program that compliments riding. He was quick to notice the excellent strength and body control that horses have given me, and was eager to compliment it. Runkle is very fit and talented and I do no service to him by flopping around on his back or requesting breaks when it's really important that we keep going.

I don't like the term amateur. I'm proudly a Professional Unprofessional. Amateur sounds like someone who doesn't know what they're doing, who is just dabbling and isn't serious. I know there are some amateurs who are happy there, and that is fine. But for some amateurs, just because we are not 'professionals' in the legal sense doesn't mean we should take it any less seriously. We can be serious and dedicated, albeit on a smaller scale. Whether you have FEI aspirations or just want to do walk-trot dressage tests, it shouldn't make a difference in the rider's attitude. Our horses deserve the best, from tack to feed and everything in between. Why shouldn't they have the best version of their rider as well?
Labels: cross training