If you read my 2015 year in review post you saw I had the opportunity to work abroad for the first part of the year. The very first thing I did when I found out I got the job was buy tickets to Badminton. It's my goal to go to every four star in the world, and being in England already seriously cut down the cost of the trip.

I spent money on really good stadium tickets in the grand stand and booked a hotel room over Saturday night in a local (ish) B&B. I had a Zipcar account for years and there are tons of Zipcars in London (that are automatics, even) so I got one of those. It didn't bother me that I had to go alone. My plan was to drive out early Saturday morning in time for the start of cross country, get in to the B&B that night, and then early start to see the final jog, show jumping, and be back in London by dinner.

This sounds really good on paper. I know it does.


I got in the car at quarter to seven on Saturday morning. On the wrong side. Driving on the wrong side. I drove for about 20 minutes before I realized I had left my tickets pinned to my fridge. Good start...

The entire drive I just kept saying to myself "This is SO weird". The street just looks REALLY different on the other side of the road. And it wasn't physically driving on the other side so much as sitting in the passenger seat and driving. I kept drifting to the left because I felt like everyone was coming quite close on the right. Once I hit the highway it got much easier. Also people in England drive so bloody fast. I was doing 75mph or so, minimum, and people were absolutely blowing past me in the right lane.

Once I got off the highway and I was within range of Badminton Radio I listened to that. The show sold earpieces for 9GBP that tuned into the radio all weekend which was awesome. Every time I saw a sign for the horse trials I got more and more excited. Even sitting in traffic was stupidly exciting. I parked next to a landing strip for private aircraft that was about a forty mile walk away from the grounds but I bounced the whole way there.

Once inside I stopped by the grandstand to watch the cutest thing ever: Shetland pony races. 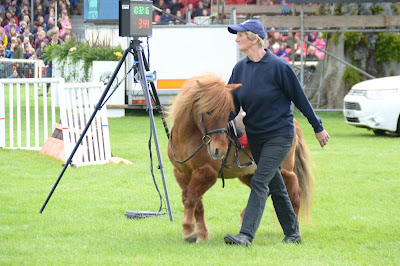 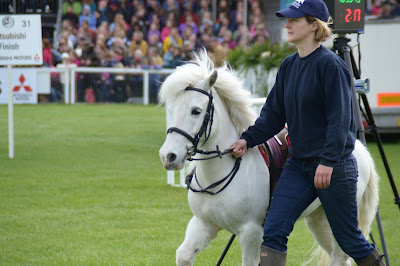 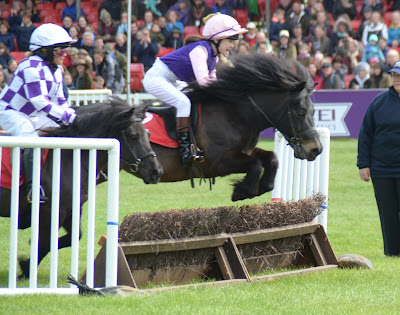 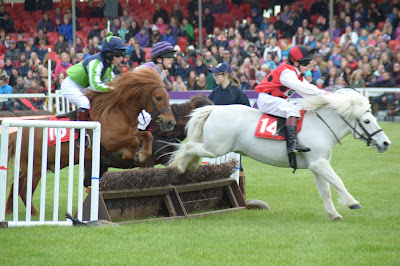 After watching several heats I started the trek out to cross country. I decided to start near the end of the course and walk closer to start. I had several places circled on the map I wanted to see; the main water, the mirage pond, huntsmans close, and the coffin complex. It was a gorgeous day, totally atypical for England. Bright sun, cloudless blue sky, warm but not too hot and lots of wind. Everyone was wearing tweed, Dubarry's and Hunter rain boots.

Two years ago the course was quite notoriously difficult. A new course designer really upped the ante, and there was a much lower completion rate in 2014. In the face of that, the 2015 course was quite a bit softer. The other slight disappointment was there wasn't a single US rider in attendance. Ironically they were all at Jersey Fresh, which is about forty minutes from where I live in the US. Initially I was upset about this but at the end of the day I loved it. It almost felt like I had no pressure; and it wasn't like there weren't dozens of the best riders in the world competing. I could guiltlessly root for whoever I wanted regardless of the flag on their saddle pad. It was kind of awesome! 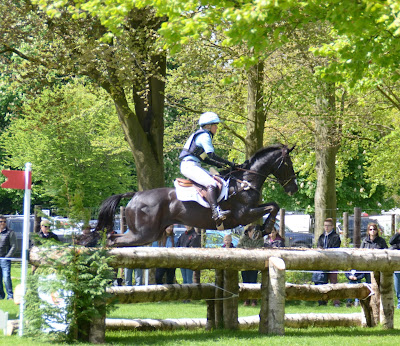 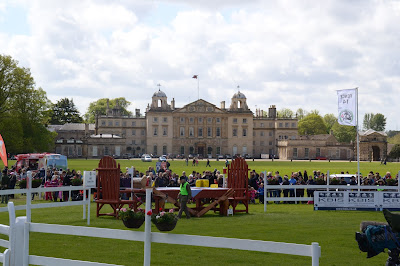 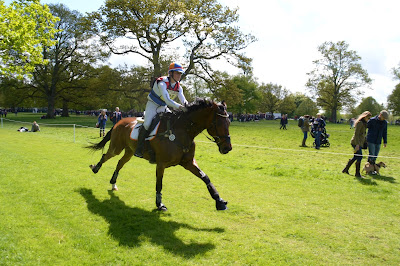 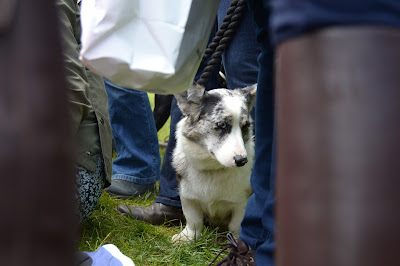 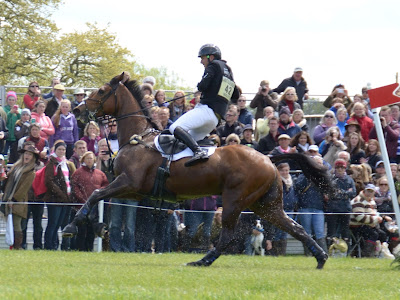 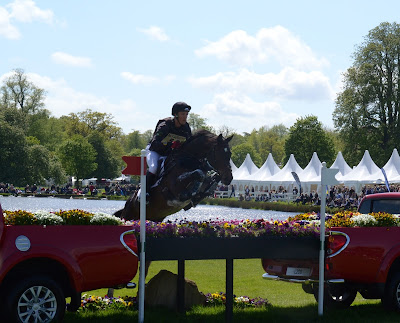 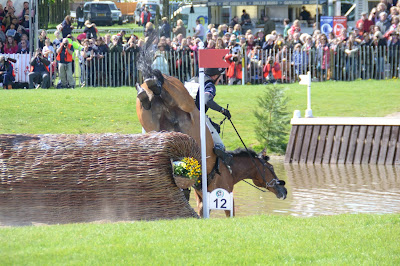 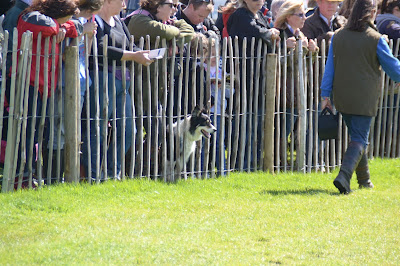 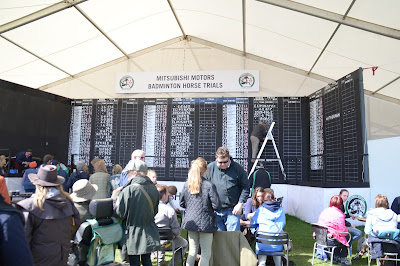 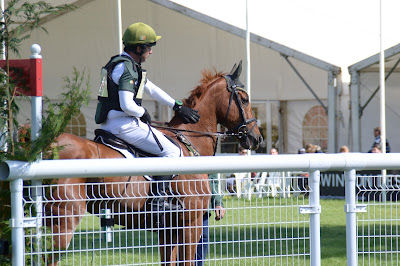 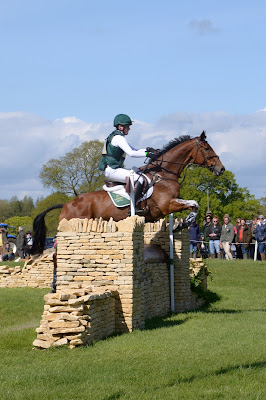 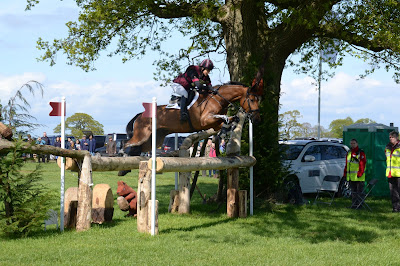 I've watched many events, plenty of them 3*'s, but this was beyond anything I had seen. All the jumps were so big. The letup fences were positively enormous. The accuracy required by the skinny jumps seemed impossible. From the first fence to the last it demanded the very best of each combination and getting to watch people compete at that level blew my mind. I ended up spending quite a bit of time at the Mirage Pond and also the faux coffin complex. Big brush jumps begging a glance off and jumps that were so awkwardly placed that my usual "leg on and sit back and it'll all be okay" would not fly at all.

My favorites to watch were Pippa Funnel, Ingrid Klimke and of course William Fox Pitt. I saw WFP at the Huntsman's Close on Chilli Morning and I took a couple pictures but mostly I just watched. That horse is incredibly athletic and looks very challenging to ride. He's quite wiggly looking! And if he's like that with one of the best riders in the world on him then he'd probably be 70% sideways if a mortal rode him.

I loved being at the coffin complex the most on course (especially because I became buddies with the photographer there) but when I wandered over to the cool down area after the course it unexpectedly became my favorite part. Horses I had seen larger than life out over the jumps suddenly looked smaller. It was actually hard not to hop the fence and start helping when a new horse came in. Unless the rider was extremely famous, necessitating an interview, they helped in the cooling out process. I loved seeing the back door displays of horsemanship and teamwork. 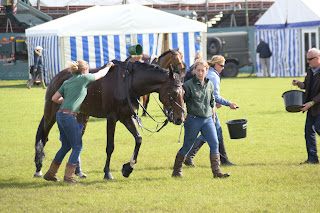 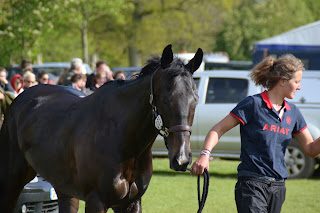 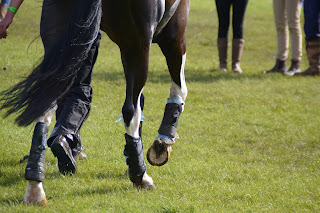 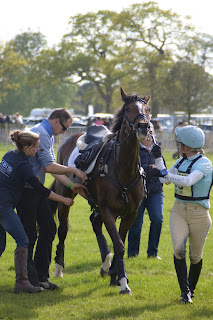 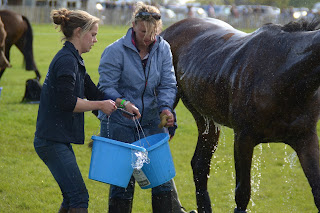 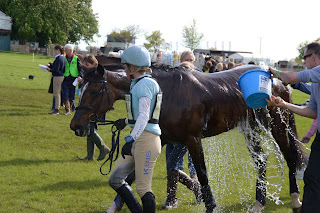 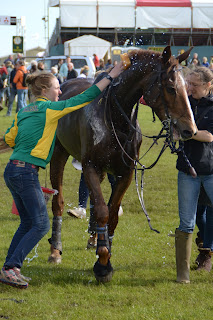 Finally cross country was over. I wandered through the massive trade village with a cider in one hand and a meat pie in the other. At the end of the day I headed out to the parking field and stood there as I realized I had absolutely no idea where I was parked. Every field looked the same and they stretched as far as I could see. The saving grace was after about twenty minutes of wandering I remembered I was near the private air strip!

The B&B I stayed at was so cute. The room was comfortable and had a view of fields full of horses. The proprietor greeted me by name and took me up to my room where I took the best shower ever, uploaded about a billion pictures and slept the dead sleep of someone who wandered in a giant field all day watching gorgeous horses gallop and jump.