When I first tried Indy his owner casually mentioned he did stick his tongue out but only sometimes and only when she first got him.

I saw the pictures, I actually thought it was pretty cute, and when I tried him he didn't do it at all so I assumed we were good.

It turns out the tongue thing is more work related. Work related in that it is his giant middle finger to the left rein and dressages because dressages are STEWPID.

So the tongue is here and it's time to deal with it. Time to take out all the ammunition. Slapping it with a crop didn't help, so I moved on to less childlike tactics. I started with some clicker training, but that was difficult because I only worked on it in the crossties and I hadn't quite sorted out how to do it while I was IN the saddle yet.

Tightening the noseband didn't help. I had it so tight I'm amazed he could breathe much less stick his tongue out.

The Micklem kind of helped? But there was still enough tongue that like... I mean maybe a blind dressage judge wouldn't notice?


So I started reading.

Pro tip? Don't google it. I've never had less helpful results than when I googled my horse sticks his tongue out. You just get all these people who were like "I used one of 75 bits and my  horse never stuck his tongue out again!"

Last fall at a tent sale I had picked up Doug Payne's Riding Horse Repair Manual and he has a whole section devoted to teeth grinding and tongue waggling. So I brought it with me when I took my car to get inspected and memorized the whole thing. I was ready to go to the barn and attack Indy's tongue with the might of a ballsy four star rider.

The reason you get dinged for tongues waggling in dressage is because it means the horse is flipping you and the bit off. Seeing as the whole point of dressage is they need to be on the bit this is not ideal behavior.

Depending which side your horse is sticking his tongue out on, that's the rein he's probably choosing to ignore. Indy only ever sticks his tongue out on the left side so his issue was with the left rein. The focus of every ride, especially when going to the right, was to shove shove shove his ass into the left rein. It was a combination of what I had realized reading the book and my trainer simplifying Doug's general ideas for a baby horse and less than four-star-pro rider.

Let me tell you, Indy was not a fan. I started to be able to tell exactly when his tongue would go out. He would fight me as I pushed with my inside leg and then suddenly 'give' but the feeling in my hands was empty. Sure enough, if I peeked over, his tongue was flapping out. So I kept after him and he ground his teeth, flipped his head in the air, went slow, went fast, went slow and fast somehow at the same time.

Until he eventually gave up.

We had this fight almost every ride for almost two weeks. I think every day he was hoping I would forget I wanted to have this argument, and then we'd have it for about two minutes and he would give up and move on. 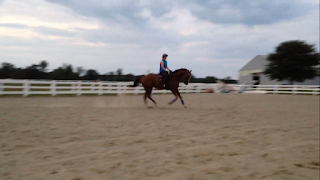 Before I realized it, it had been weeks since I had seen his tongue hanging out.

That's not to say he's 'cured'... he still does do it. Usually when I let him relax at the walk between works it'll make an appearance. He also does it when I start asking him something difficult and he's getting flustered. It's become his look of extreme concentration.

It's probably something I'll always have to keep an eye on; but for now I feel optimistic. Maybe we won't be a total disgrace in the dressage arena??