They have their show name, which is long and hard to yell when they're misbehaving but sounds great over a loudspeaker.

Then they have a barn name, which is the one you scream at the gate when you don't to walk into the back 40 to catch them. 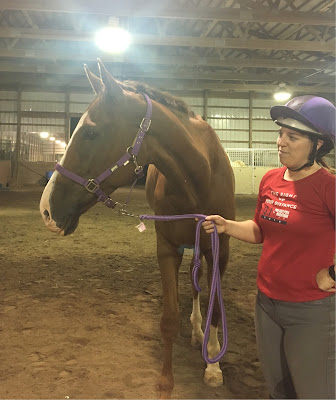 However I've found most of my horses have a third name. It's not on the stall plate, but it's the one I end up using the most. It's a term of endearment, it's the name I use to comfort and pump him up, to give him encouragement. It's the one he pricks his ears for because a treat might be incoming.

I don't think you pick the third name. It just comes out of your mouth without you realizing it, and you (the horse's 'mom') are the only one who uses it.

Runkle's third name (although I guess in his case, it was only his second) was Monkey. I think it was a play on Runkey and it definitely fit him. He was silly, mischievious and wild.

I don't know when it happened, but over the past week or so I've noticed it cross my lips more and more. It's easy to say with a pat on the neck when he finally figures out lateral work. It catches his attention in the field and under saddle because he knows it's not just his, but maybe understands that it's ours. Or I could be anthropomorphizing him.