Moving On From Old Dreams

I know I'm not the only one who spent most of their horsey life without a trailer.

Having one (and a tow vehicle to pull it) is a huge expense the majority of horse people just can't swing. So, like everyone else, I had to beg and borrow rides with other people. I had to cross fingers that people were going to the shows I wanted to go to so I'd have a way to get there. I spent many a horse show on the trailer's schedule; getting there hours before my class or waiting hours after I finished.


In 2017 I got lucky. The stars aligned and I got a super deal on my dream trailer. This was the boat that was going to take Runkle and me up and down the East Coast. She spent most of the winter undergoing some known and well needed repairs, and she came home just in time for the spring season.

A month or so later, Runkle passed away. He hadn't even set foot in it yet. But that's okay!!! Because I got Indy. And suddenly I had this very super-sized horse that would fit comfortably in my very super sized trailer.

Then Sara and I got in a horrific car accident. Without going into too much detail, it is really a fucking wonder we are still alive. I'm not a religious person, but I felt like the hand of the universe miraculously kept us safe. While I was physically fine, mentally I have never felt the same about driving. I probably never will. It's been over two years and I still sweat when I get behind the wheel. I've had to do a lot of work to quiet the fear and stop the flashbacks to that night, and the feeling only amplified a thousandfold when I got behind a much bigger wheel, with my best friend behind me.


I successfully hauled Spicy a few times. They were all problem-free trips. As much as he gets anxious about loading, he is totally fine once he is on the trailer. The thought of getting behind the wheel made me nauseous, and usually the night before a trip I would lay awake sweating. I'm nothing if not stubborn though. I refused to let the stranger who hit us crush my dreams. I waited decades to get my own ride, and this was my dream trailer, and I was going to LIVE MY DREAM, DAMMIT.

This spring, Emma and I had planned to finally (FINALLY) do a ride together. We were going to meet at a farm sort of equidistant to both of us, an easy drive for me that I had done before. But leading up to the trip, Charles was having some Charles-y moments. I quickly offered to postpone, and Emma waved me off saying we'd be fine for a trail ride. And we probably would be.

The day before our trip I was having my BO's husband (aka The Barn Dad) check the air pressure in my tires. Tire pressure was fine, but as I went to move the trailer out of the driveway the brakes on my truck went alllllll the way to the floor to stop. I had recently redone the front brake lines but I figured the back ones had just gone.

Instead of feeling upset that I couldn't go meet up with Emma, I felt relieved. That relief was disappointing and even a little shameful to me. Why the hell did I have this huge rig if I was afraid to drive it? What was the point if I actively avoided going anywhere?

If I wasn't comfortable driving my current setup, as dreamy as it may be, I needed to make a change. I took the summer to sell my dream truck and trailer, and I got something smaller. 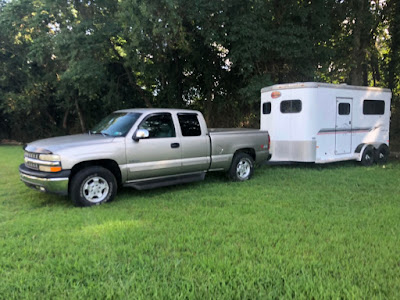 My first unloaded trip I was extremely jumpy and nervous. But the second went better. An unfamiliar feeling comes over me when I think about the new trailer. It isn't sweaty-palm nausea. It's butterfly-stomach excitement.

It feels good, after so much fear and anxiety, to be excited.
Labels: musings