It's Not a Setback

I was stalking a big name rider's Facebook (normal) when I came across another page through several layers of friends and groups that had this picture: 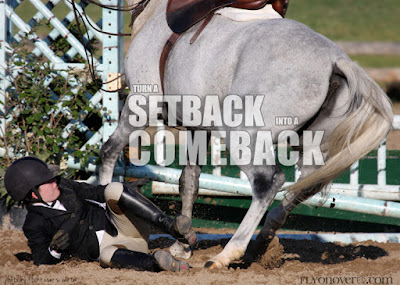 I've tried to start this post about eight times (which is why it's late, again, oops. I don't know why I bother having a day anymore it's useless) but every instance came out so contrived I felt ill at the thought of someone else reading it.

The long and short of it is, I'm FINALLY back in the saddle.

I don't know what I was expecting but Runkle was fantastic, really better than I could've imagined. He was pleasant, obedient and still remembered everything he did two months ago. Yeah, our canter transitions were a little dicey but that actually ironed itself out by our dressage lesson on Tuesday. Yep, I've even had a lesson already.

It's fantastic to be back, and not just because I missed riding my horse. I like being at a boarding barn because of the social aspect, but it's hard to be in it when you're not riding and frankly slacking off about going to the barn at all. I miss riding with people and talking to them, going for little hacks and watching our horses interact.

I've still got a ways to go before I'm back to where I was. I'm going to OT twice a week to pick up little foam plugs and curl my pinky around straws. That sounds a lot easier than it really is, it is brutal and painful. I'm really loose in the tack and have no hand strength so jumping is off the table, probably until I get back from Montana (oh, yeah, I'm going to Montana...!) but I'm okay with that. At least we're back together. 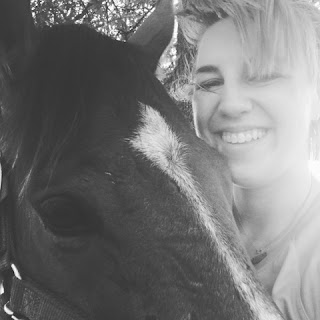 So that's all for now, and it's more than enough!