This past Saturday marked my last day of training for the half marathon.

I started training for this in the beginning of June. I balanced a new job, riding, and an increasingly more rigorous running schedule in the hottest summer I can remember. I've been living in Philly almost five years and I've seen more of it in the past three months of training than my entire time before that.
The biggest change I've noticed though, is in my riding. There were so many times I would be working through something, either on my own or in a lesson, and I'd realize a few months ago I would've hit my limit. Sometimes if Runkle is feeling sassy and we have to figure eight over two jumps for five or ten minutes straight, waiting for him to settle and learn.

Instead of barely stringing together jumps and clinging to his neck I was able to sit and ride and push through it. As it got colder and he got more full of himself, being more fit meant he couldn't dump me when I got tired. I realized how lucky I was that my prior horses were okay just kinda taking care of me when I got exhausted. It isn't fair to ask that of Runkle. He doesn't even know what I want yet! He shouldn't be expected to learn and take care of me.

Even though the race is a little over a week away, I still felt like it's over. The hardest part - running four times a week and doing three ten mile runs - is done. Now I'm on training vacation, or taper.

Or so I thought.

So far, taper SUCKS. My friend Alex who is a marathon runner and way faster than me explains it far better in her post here. But to put my own spin on it, this is by far the worst I've felt in the whole training process. Maybe with the exception of the first week where I was sore because I hadn't done more than flop around on the couch in years.

But this week I have had shorter runs and more time off than I've had in about three months and it's terrible. My legs felt like wood. I was a wooden puppet that needed her joints greased. Everything hurt. I barely struggled through a three mile run before giving up because for some reason my knee hurt. My knees have never ever bothered me. Ever. Why did I suddenly have old person knees??

Then yesterday my run felt significantly less wooden. The first mile went great. But as I went on I started to feel like I was running through really deep sand. I guess because some asshole dumped invisible sand all down front street that I had to run through.

In an attempt to remain optimistic, I keep reminding myself that in nine days I'll really  be done. And because of the time change I don't have to do my runs in the dark alone anymore!

I have no idea how the race is going to go. I have goals, and I've worked very hard to reach them. But I had a lesson pre Splintember where Runkle tried to buck me off (because he hit a jump due to his own laziness, which is totally my fault, wow I'm such an asshole) and I didn't fall off because I wasn't exhausted.

I bet no one else in the half has that victory. 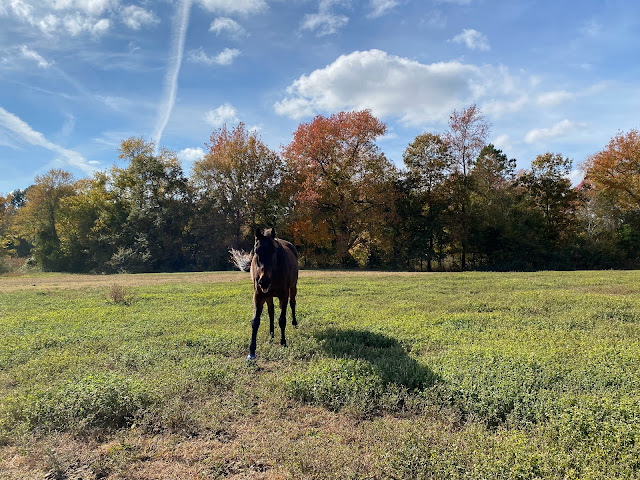