I mentioned in the comments of my original post that it was the very horse only readers digest version of my trip because I wanted to try and cover as much ground as possible.

But as soon as I posted it I realized there was a TON of stuff I forgot or wished I could have put in, so here are a couple odds and ends that I thought I might share :)

1. Airag
The most typical alcoholic drink in Mongolia isn't something you'd find even in Wegmans' specialty booze section. It's fermented mares milk.

Apparently mare's milk is great for fermenting. It has tons of sugar in it, which is a key ingredient in the process. They typically milk the mare, put the milk in canvas bags and hang it around the outside wall or ceiling of the ger (yurt in Western terms) for it to ferment.

At the Naadam Festival there were people going around picking empty bottles out of trashcans, filling them with airag from a metal container in some kind of wagon and turning around and selling it to people wandering around the festival. 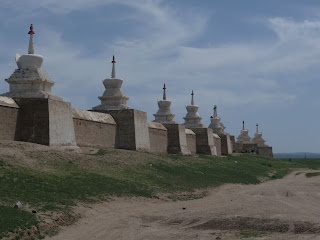 One of our day trips took us to Karakorum, an epic capital that Marco Polo wrote about in his diaries of his travels on the Silk Road. Unfortunately Mongolians were pretty bloodthirsty savage people so at one point or another the city was razed to the ground. Now there's a monastery there filled with different gold Buddhas.

While we were there our guide managed to procure some airag and naturally I had to try some.

I'm not sure what I was expecting but it was the most disgusting thing I've ever had the misfortune of putting in my mouth. Our guide drank it casually like it was regular milk. She said they even give it to kids, and that Mongolian men ride from house to house drinking with people.

It tasted like liquified feta cheese. Or sour milk. Not just sour milk but milk that had been left out while you went on vacation for a month. And maybe the sun streamed in the window and shined on it. It was all I could do to not spit it out all over but I thought that would be horribly rude. So, uh, I'm glad I tried it because I needed to say I did, but holy crap.

2. The color blue
Shamanism isn't as popular in Mongolia as it used to be. Communism kind of ruined everything, what with it's godlessness necessitating the murder of almost every religious person in the country. Mongolia was Communist until the early 80's, and when I was there it still had some sketchy commie leanings (for instance, the 'Revolution Party' was actually the Communist party in disguise). 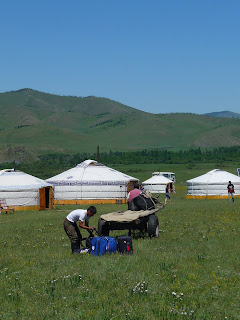 Anyway, even though most of the country is non-religious now they still hold on to a few of the more superstitious and popular traditions. Blue, and the sky, are very holy things to traditional Mongolian shamanism. Birds are considered sacred to the point where pigeons (yes pigeons) are considered a sacred bird and are encouraged to land and poop all over everything in a monastery. It's because they're grey, which is a color of peace. Still seemed odd when we went to see a thirty foot gold Buddha that was covered in bird crap.

For luck, people had tons of these cheap scarves the same blue you'd see in the sky on a bright, sharp, sunny, cloudless day. It's considered good luck to hang them on the top of your ger or on your front door. I actually have one I bought from Karakorum that is still on my front door.


It's also popular and common to tie the scarves on young horses that you hope will be fast one day, as it's said the scarves will help the foal become as fast as the wind itself.


3. Naadam Opening Ceremony
Before the wrestling started on the first day of the Naadam Festival, the opening ceremony told the story of Chinggis (Mongolian for Ghengis) Khan.

Apparently Chinggis' mother flew down to him and his brothers from the top of a mountain to stop their infighting.


She handed him a bundle of arrows lashed together and told him to break them. He was unable to, because tied together they were stronger than they would be apart. It was a metaphor for her kids getting along instead of battling and feuding each other. And to think, my mom just put my sister and me in time out...

I think Chinggis and his brothers were happy and working together for a couple decades or so, at which point either they or their sons tried to murder each other and burn each other's cities to the ground. God his mom must've been pissed.

Mongolia also had the most impressive drill team I've ever seen in my life. Hundreds of horses went into creating the opening ceremony. 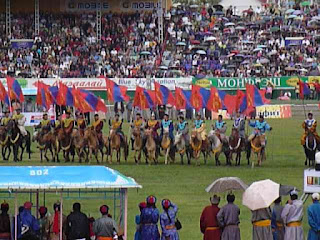 The banners are made from the hair of palomino horses. These are the peace time banners. In times of war the banners are made from black horse hair. Fun fact: apparently Chinggis' favorite color of horse was palomino. Palominos are really popular in Mongolia, and it was cute when my riding buddy was trying to explain the color to me because they don't have a word for it, or at least a translation. He pointed out a chestnut horse and said it looked like that but 'a little bit different' and with white mane and tail.

4. I rode a camel for the first time.
They had the two hump camels. Apparently mine was naughty. He tried to run off with me. Of course I'd fly thousands of miles away and get a naughty camel who tried to kill me.

He also had flaccid humps; the rest of my group never let me live that down.