When you get a custom County, one of the perks is the first included fitting. After you've had your saddle 2-4 weeks, your fitter comes out and checks to make sure everything is fitting exactly perfect. They ask that you ride in the saddle a bit to compress the wool slightly, which is perfectly fine so long as nothing is overtly pinching and you have good wither clearance.


Since my saddle came at Thanksgiving, between the holidays and infernal, eternal rain, I ended up not getting my fitting set up until the first week of January. Which, if you recall, my horse looked a bit more... feral.

The day of our first fitting was cold and super windy. I was having trouble controlling Spicy on the lead line, much less under saddle. I had already decided at this point that we were going to start over with ground work, but I was hoping he'd let me take this one little shortcut so I could make sure the saddle fit us.

My poor fitter. She said once I sat on him he humped his back so hard she saw daylight under the rear of the panels. We all decided it would be better not to risk life and limb. She fit the saddle as best she could from the ground and told me to let her know when things were... a bit calmer. The note she left in the sales report was pretty funny - she diplomatically stated that Spicy was not super cooperative for his appointment.

In the end of February I started to sit on Spicy occasionally, and his work on the ground was really coming along. I was feeling optimistic that my horse would be rideable again one day, so we set up another fitting appointment for March. Spicy was building topline in kind of an interesting way, creating dips on either side of the withers. When I girthed up the saddle and sat in it, the angle was off, causing me to tip forward.

This didn't go particularly well for me. Turns out, I lean bad enough already that when my saddle tips forward I'm gonna end up in the dirt. 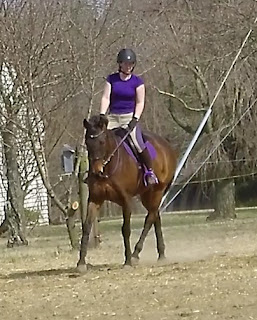 When Saturday, the day of our fitting, finally showed its sunny face it was windy. It was just as windy as our last ill-fated appointment...

First the fitter checked the saddle on Spicy's naked back. She saw the same issues I did and spent ages stuffing tons of wool into the front of my saddle and hammering it smooth. We discussed the design of the saddle and how there was room for even more flexible fit if we needed to. She also helped me with my propensity to put the saddle on the shoulders. I'm always worried its not far back enough. She showed me where the point pocket is on my saddle and then helped me feel where the scapula is at rest, showing me the little dip where the tree sits. 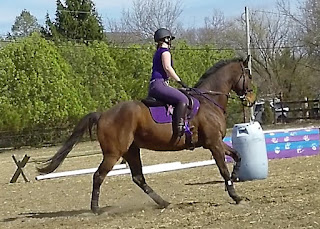 Once we were happy with how it fit statically, I started my rather lengthy warm up process. My fitter is so supportive and kind, she stressed several times that I absolutely did not have to get on if I wasn't comfortable. Luckily, I don't have an ego about this anymore. Especially since discovering long lining, I've realized I'm much less pressured to throw a leg over. Hey you wanna be a turd and bolt and buck? I can stand right here and make you work twice as hard with no risk.

Selfishly, I was actually looking forward to this fitting and I was secretly pleased it was the same sort of chilly, windy day. This was the proof of my process to an independent third party, who hasn't seen us in months. And the verdict? She couldn't believe how much better he was.


My saddle felt amazing after the adjustment. The 'sweet spot' I had experienced in my initial trial was back, and I was able to sit bolt upright while keeping my back soft. It took all winter, but I feel like all the pieces are finally starting to fit together just right!
Labels: goals spicy tack