Harrisburg is not exactly what I would call close to where I live, and for that reason alone I haven't been to the PA Horse Expo in years (possibly over a decade). It's not the biggest expo by a long shot, I'm actually super anxious to go to Equine Affair now, but still. It's a huge venue a day drive from where I live, so that's going to happen.

There was only one demonstration I really was keen to get to, and we made it to that one. It's a horseman by the name of Brendan Wise.

My BO initially pointed this one out to me, and I went 'oh my god, they have clinics for Spicy! Who would've thought!' We were a few minutes late but I was immediately glued to everything he was saying.

What's interesting about this horseman is he unites natural horsemanship with classical dressage training techniques. The horse he had to demonstrate on was a very nervous Thoroughbred mare who was really overwhelmed by the arena and all the surroundings. She did all the exact same things Spicy does (albeit Spicy got there in a much less stressful situation). Brendan calmly worked with the mare in hand for an hour. He kept apologizing that the clinic was so boring and to someone whose horse is sane and not overreactive, it probably was really boring. To me, I was riveted.

One thing Spicy and I have struggled with is shoulder control. Max talks constantly about how 80% of the horses evasions come from the shoulders. Spicy might be 100%. He's got a spin move on him. The books recommend teaching horses turn on the forehand, turn on the hindquarters, and lateral work to gain control of the shoulders.

Try as I might, I could tell all I was doing was frustrating Spicy and getting nowhere near any kind of control. But Brendan Wise had a very nervous mare leg yielding no problem. I couldn't quite tell what he was doing, but luckily for me, he took questions. I got so excited I almost tripped over a row of seats trying to get his attention.

I asked how to get my horse moving and yielding his shoulders. I know someone was videotaping and I wish I had a video of my question and his answer but basically what he said was: I need to create forward energy and then direct it, primarily using my body and not the reins. I think that's where I was getting stuck. I'd get forward, try and use the hands, and then he'd get stuck because I was pushing (with the driving aid/whip) and pulling (with the reins) at the same time. This meant his energy had nowhere to go. By stepping into his space, and keeping my body at an angle, I redirected the flow of energy as if it were water.

This is the diet version of what he said. He did a great job demonstrating with the mare as he was explaining it. I wish had taken notes, but I just held onto it and tried it as SOON as I got home. Sure enough, after weeks of struggling, in less than five minutes I got Spicy to move laterally, crossing his front legs. Since then I've gotten more suppleness in the shoulders and he's actually starting to, you know. Bend.

After the demo was over we went back to the main hall. The vendor section was of course huge, but not too much really jumped out at me. I had a remarkable amount of self control shopping wise which doesn't make good blog fodder but there you have it.

Actually that's not true, I did buy one thing. 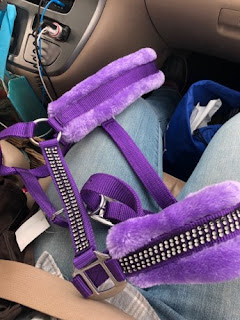 It's purple, and has faux sheepskin and rhinestones.

There was a bunch of other stuff for sale, including my local County rep and a truckload of saddles. I found a County Connection with my specs on eBay, so I sat in hers to test it out. It was pretty good. Then I made the mistake of sitting in the Epiphany. That is SOME SADDLE. I hugely regret sitting in it. Seeing as I still not have paid off the current precious, we have some time before I can start adding New Precious (in brown, with patent accents standard). 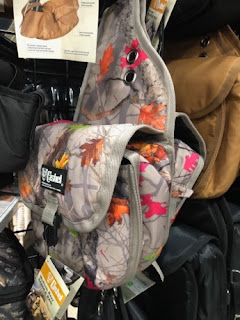 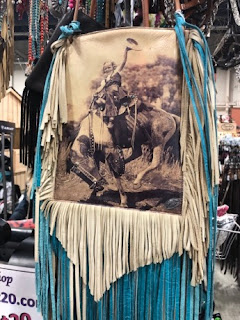 I had such a good time. It was a loooooong drive but totally worth it! Now just to make plans to make it to Equine Affair... not sure if it'll happen in 2019 but maybe 2020??
Labels: just for fun reviews shopping 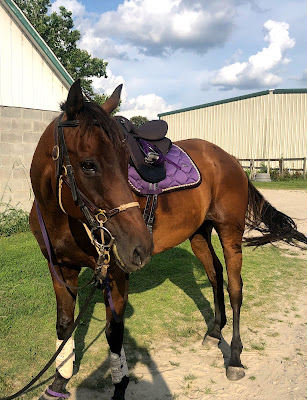 Brunch with the Bua