I typed 'horse' into Netflix one night, because why not, and it gave me a little film called "A Gift Horse".

I'm not sure if it was intentional, but I think it should be filed under comedy not family movies.

The plot line is a tale as old as time. Unappreciative daughter of a multi gazillionaire is not enthused enough about riding. The poor stable hand loves the horse more than the rich daughter. Rivalry and drama ensues. 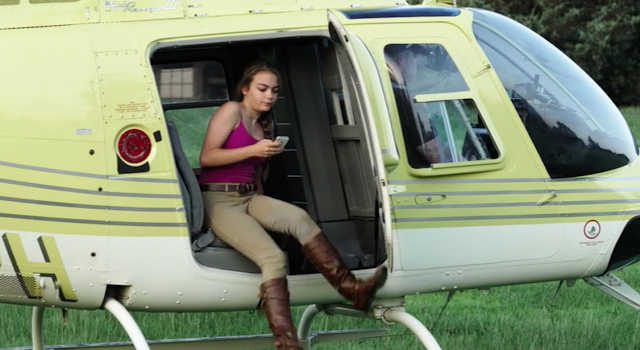 The movie starts off on an immediate high note when the main antagonist (Abigail) shows up for her riding lesson in a goddamn helicopter. Then we meet the trainer (Charlotte) and the poor stable hand who loves the horse more than the spoiled daughter, Mary Sue. I mean, Amanda. Excuse me. The kid's name is Amanda. Nah, screw it I'm just gonna call her Mary Sue.

Charlotte can't even control her artful braid, let alone a combative teenager, so Abigail blows her off to play on her phone and Mary Sue offers to jump on the grenade and ride the magical white pony Misty instead.

A few things I notice off the bat:

1. The horse looks nothing like the one in the video poster.
2. Nobody in this movie can ride. But maybe this is a story of self exploration and learning.
3. We get introduced to, in my opinion, a kind of racist character.

I watched this movie almost three times, and it took me a partial third watching to figure out who he's supposed to be. Avery is allegedly the best trainer this side of the Mason Dixon line (which side, I'm not sure. But I suspect the south). Wait, then why the hell is Charlotte there? Probably because Avery is too smart to want to deal with teenagers.

Then we meet the feared Mr. Canton, Abigail's father. Part time intimidator, part time millionaire. He has a weirdly out of place tender moment with Mary Sue in which they walk out on the porch and discuss absolutely nothing and then leave. Also she has a broom.

Mary Sue goes home after 'finishing her duties' (her words, not mine). We are introduced to a sort of unwanted step-mother situation where her dad's disproportionately hot girlfriend is met with an awful lot of hostility by Mary Sue. Sounds like Abigail isn't the only moody teenager around here, Mr. Canton!!!

This is probably nit picky of me, but look at this girls room. 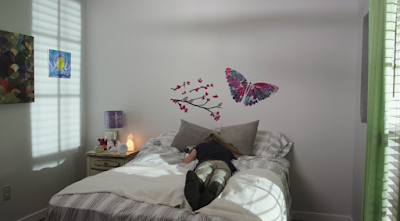 Do they really expect me to believe this is the room of a horse lover? Does this look like the room of a tween rider to you? A BUTTERFLY decal? Really? They couldn't scrounge up some Young Rider posters?!

There is a lot of concern over Abigail not being ready, and everyone running out of time. What, is she aging out or something? I fail to see the urgency.

Avery tells a story about someone putting superglue in his toothpaste.

Mary Sue is all bent out of shape about everything which leads to her and Charlotte sitting by the lake, talking about life and how selfless and full of love Mary Sue is. Talk inevitably turns to Mary Sue's mom.

Then they have a cry and profess their love for each other.

The day of the big show arrives. Everyone is grooming the spotless white pony, although apparently no one can be arsed to braid it. Considering this is a two foot class (Jumpers? Equitation? I don't know) there are an awful lot of spectators. Mary Sue is watching the show innocently sucking on an ice pop (??) and suddenly cupids bow strikes and a prepubescent boy does a double take.

Then before we know it, it's Abigail and Misty's turn. Misty knocks down one of the impossibly small jumps and Abigail yanks her face off, dismounts, throws her hat and stick on the ground and leaves the horse (and, frankly, everyone else) standing there staring in disbelief.

So the show is a bust. Saw that coming. Meanwhile, back at the ranch, Mary Sue doesn't like how cozy 'Ms. Tiffany' is getting with her dad. She then accuses Ms. Tiffany of not keeping her dad happy. 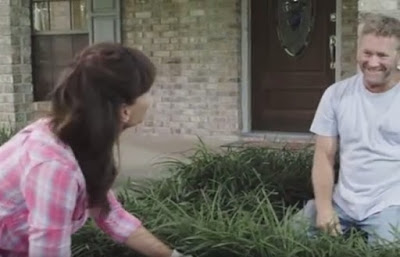 After her blowup at the show Abigail declares Misty a dud and refuses to ride her EVER. AGAIN. Of course Mary Sue loves Misty and everyone believes in the horse because 'her father was a champion'. This movie has a lot of daddy issues. Everyone convinces Mr. Canton to give the mare another chance, although Avery honestly doesn't seem too optimistic if you ask me. Every time anyone asks him about her potential he's like "uh, I don't wanna say". Yeah, he doesn't want to say because ~plot twist~ the horse is actually a piece of crap.

Mary Sue starts 'working' Misty. In quotes because I'm not sure what they're doing is considered riding. But then, the unthinkable happens. 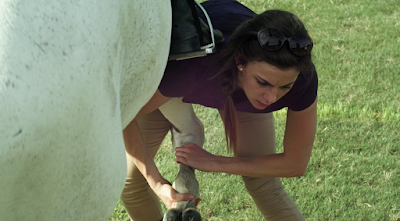 What will happen to her now? Will she live up to her father's expectations (I'm talking about the horse, not the kids)? Or is she bound for New Holland? Will Abigail stop being a petulant teenager? Will Mary Sue stop Mary Sue-ing?

I guess you'll have to wait and see.
Labels: reviews