Just so we're clear, the question posed was: If you could steal a horse from any of your friends or barnmates, which one would it be?

If the bold did not apply, you could probably already guess who I would steal...
But since I don't train at Windurra and Boyd Martin isn't my best friend (YET) I'll pick someone else. Hmmmm...

There are a lot of really stupid cute and talented horses at my barn right now.


So you see my dilemma. And this is the people in my barn. It's not even including my friends. Much less acquaintances.


But at the end of the day I realized I had to narrow it down eventually and I couldn't pick one. I picked two!! And it shouldn't surprise you that they are both Thoroughbreds. I'm so original.

The first is Roxie, who belongs to an adult amateur in my barn. She's nine I believe, and her owner has done a fantastic job exposing her to all the things and taking her to all the place. She is put together really well and also does helpful things like self load and tie to the trailer. She just moved to my barn maybe a year or so ago, and in that time she's developed a ton of topline and great booty muscles (for jumping the big jumps).

Speaking of jumping, she is SO INTO IT. To the point where she can be a little rude but to be honest I'd rather have a rude horse that loves jumping than a polite one that was really meh about it. 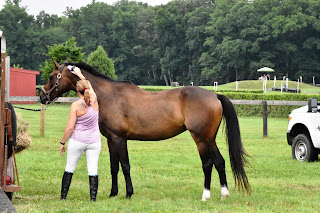 She's a mare so, you know, there's that to contend with. I used to only really like mares; in fact Runkle is the first gelding I've been 'serious' with in awhile. I won't lie, it's been nice riding something that's easy to tell him to shut up and sit down and not have to finesse and trick him that it was actually his idea all along. Even though I am pretty good at that. But I do miss mares and their grumpy tenacity. You can't beat a good mare. Click here to see Roxie looking 'foxy' (lol) and dressage-y.

And the second horse I'd want to steal is named Castle Hill. He's a steeplechase horse at the farm I got Runkle from, and I have had very little interaction with him besides meeting him in the stable and pictures his trainer posts of him jumping but let me tell you... 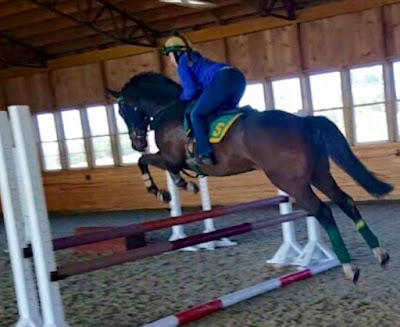 Look at him!! He's GORGEOUS. I bet he'd be a killer cross country horse. The only problem is he's actually good at hurdles (in fact I think he won just this past weekend) so he's not going to retire from that anytime soon but god damn if he ever decides he doesn't want to race anymore... shotgun. 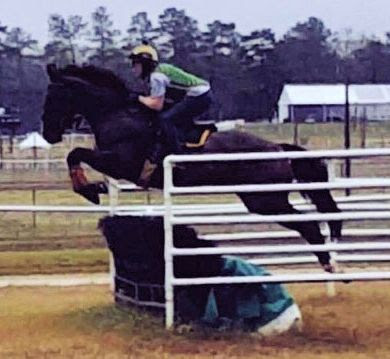 So that's who I would steal. I mean, what, I don't steal horses you guys don't have to worry you don't need to lock your barns at night and microchip them. Just leave the gate open. It's fine.
Labels: blog hop