I was kinda hoping everyone else would post their Plantation recaps before me, so I could do less work. It's a strategy that served me well for Great Meadow. They're also better bloggers with better memory than me. Lots of pictures below, click to enbiggen ;) If you want more, I have them all in a Flickr album here.

Got to the show at around 11ish, with Emma parking literally minutes right behind me, completely unplanned. We're just that good. 11ish is not too early for beer and pizza, so we got some. Side note, can the brewery tent pls to be accepting credit cards in the future? So I can just open a tab?

The CIC 1* stadium was running up in the arena so we briefly stopped by there and watched the last few horses go. The jumps looked tiny compared to the 3* the day before, but still gave their own share of problems. Plus the division was absolutely enormous. 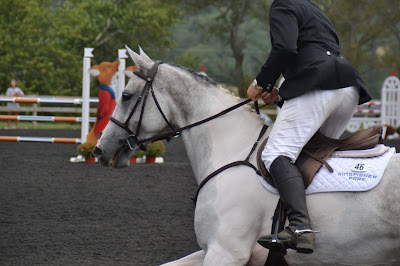 We also got to see the CIC* Young Rider awards ceremony which was fun. They gave out lots of pretty ribbons and played the national anthem since it's an international event. I was so excited for them, the girl who won was like 16 or some ridiculous stupid thing that made me feel horrible about myself. Olivia Dutton placed somewhere in the ribbons and she's freakin' 14.

After the victory gallop we watched the CIC** finish up cross country. They were running it in reverse order as per usual so most of the big names were running towards the end. Phillip Dutton galloped past us over the hunt jumps and then down to the final water, three jumps from the finish. It was down the hill from us so we couldn't see but a few seconds later we heard the unmistakable pop of an air vest deploying and then a horse running riderless up the hill.

He was fine, thank goodness. Do we need to start bubble wrapping our Olympians as well??

Lauren Kieffer galloped by after on Landmark's Monte Carlo who is basically a real life unicorn. So many greys!! And after her Boyd on a new mare I've never seen him on before. He was the last to go since he had been sitting in first the whole weekend. As he galloped by I said "I wish you luck, don't do anything silly at the water," which must've jinxed him because thirty seconds later we heard ANOTHER airvest pop and Kyra was galloping up the hill!!

Guys please do not be maiming yourselves at 2*'s. We need you. I just can't believe they both went within minutes of each other at the same jump. What are the odds.

Once I was done jinxing everyone's day we trudged back up the hill to the arena. Plantation is really goddamn hilly. Competing there is always interesting because Runkle lives in NJ, and I never get to ride on terrain. Flora Lea has like, one hill. And it's usually only on the novice and higher courses. Plantation has about 45 hills and the course designer likes putting jumps on the side of them and make you jump down them A LOT.

The CIC3* was already underway by the time we left the puissance. Some thoughts from XC: 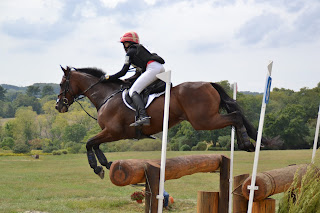 At that point I still hadn't ridden and I was tired from laying in the grass in the sun and being full of pulled pork sandwich and beer. We left before the advanced was finished.

All in all it was such a wonderful day. It was really fun to hang out with Emma and Allison, as well as a few more people from the barn. There were lots of pups to play with and ponies to watch. I wish the weather had been more fall like - I think it was almost 90 AGAIN but until Plantation develops some kind of weather machine I think I'll have to shift blame from them for that one ;)

Next up, Fair Hill!!! Which I might be volunteering at the whole thing, we'll see. Haven't decided.