A Half Marathoner is Born

I ran my half, and have very dutifully made a scientific mile by mile record of how it went. How to run a half marathon, in seventeen easy steps.

Start: The pacer group promised a 'nice slow start' to the race as mile 1 is our warm up. Next to me were two 50+ year old women. I looked forward to them kicking my ass.

Mile 1: The pacer group took off like a shot and I let them go. I actually let most people go, because the horn went and everyone broke out like it was the Kentucky Derby. I had been warned by everyone against this and frankly I am no speed demon so I was fine lolloping along letting everyone pass me.

Mile 2: All those people who bolted past me? I caught up. Also my parents were there! The course ran around City Hall. I would've appreciated it for being cooler if I weren't worried about my impending death. We also hit our first water stop and I accidentally took a mouthful of Gatorade, expecting it to be water, and nearly spit it all over the volunteer who handed it to me.

Mile 3: Went back past the start and the Art Museum. Saw my parents again, as you could easily hit two spots on the course without walking much.

Mile 4: My biggest incentive during the run was eating the stupid gels. The banana ones and the apple cinnamon ones. The apple cinnamon tasted like pie, I think I got through the first three miles because I wanted pie.

Mile 5: We were out of the city and the spectators were pretty sparse. Even though I had lost the pacer group I could still see them about 100 yards or so ahead of me and they weren't getting any farther away, which was shocking to me. I finally actually felt good too, usually it takes three or four miles for me to feel warmed up properly.

Mile 6: Ran past Boathouse Row. They're probably my favorite part of the 'Philly landscape' and I  really liked that we swung past them on the new course.


Mile 7, Hill #1: The course doubled back on itself here. The people coming back out of the woods were at my level, but we went on a steep downhill into the woods. Oh no. We hit our first hill after going down into the woods and... it was okay.

Mile 8, Hill #3: I hate everything, and this is the dumbest idea I've ever had.

Mile 9, Hill #4: Passed by a kid being pushed in a stroller... wanted to climb in the stroller. Or cry and lay on the ground.

I don't think I actually would've stopped but at mile 9 I really hated my life, and didn't want to run anymore. I walked a little up the hill. I knew there was a water stop, and my marathon running psycho friend and her cute dog and boyfriend were at the top of the hill. So I told myself maybe make it to there and don't be crying when you see them, you giant pussy.

However at the top of the hill there was a cheer spot, which included a DJ and in this case a water stop and about forty people dancing. They all had signs of varying levels of inappropriateness and were on a sliding scale of drunk. They were VERY loud and enthusiastic and I felt like my whole body took a breath and said "yep, you got this."

And get this - I was actually SMILING when I ran into my friends!! Little did they know I had been picking out burial sites next to the road fifty feet before.

Mile 10.1: Whelp, this is officially the farthest I've ever run.

Mile 12: OH MY GOD, THAT WAS ONLY ONE MILE?? THIS IS TAKING FOREVER.

Also there were photographers at mile 12 and I tried to smile but I look like I'm pooping. The pictures did not turn out good.

Mile 12.75ish: Someone on the sideline yells that we're some hundred odd yards from the finish and in a desperate bid to leave it all on the table (or just be done as soon as possible) I started sprinting in. It was really cool passing people limping through that last mile. Even though everything hurt a LOT I was so proud I could kick it into gear. My last mile I did at 8:00 min pace!

Total Time: 2:36:42. Considering even my best ten mile runs were on the high side of 2:10, I was satisfied with that time. It was good enough while giving me something (breaking 2:30) to work towards next time. 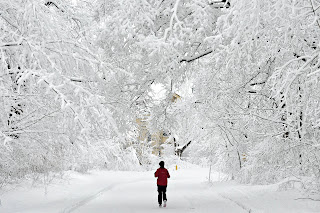