I've been enjoying these posts, courtesy of A Soft Spot for Stars (which incidentally is an adorable blog name). And not just because I like to stalk people and now I know where all of you live. I mean, what?

I've been treating it as a 'where would I go if I moved' because I always keep that lodged in the back of my mind. I live in middle of the vaunted Area II, and have been here for five years almost exactly. It's the longest I've lived anywhere.

I live in Philly and Runkle lives in NJ about 18 miles from me. This can take anywhere from twenty minutes to an hour and a half depending on how badly people are driving.

I've lived a couple of different places around the country, and where I am now is the first place that has everything I need. With my career I can only work in major cities (NYC, Denver, Chicago) and finding ways to ride out of a large city like that can be difficult and involve a lot of driving. Philly is the easiest place I've found where I can live IN the city, walking distance from work, and still commutable to a barn with good turnout.

Hay
I had to ask my trainer how much they pay for hay because the last time I really paid attention to the price of hay was about ten years ago, and it was $5 a bale. Nowadays it runs about $8. Plus my barn has access to two huge hay fields so they grow and cut some of their own.

Board
Board varies by your amenities and exact location. Stall board can range between $500-1000, depending on the place and the exact location. Pasture board can be even lower but since I ride wimpy Thoroughbreds they need stalls. I pay on the higher end of that scale. It includes blanketing, stall cleaning, all the good stuff. We have an indoor, an outdoor with the best footing ever, a jump field, and a conditioning trail around the perimeter of the property. There's private turnout available but usually they're turned out in groups of 3-6 in big fields.

There's also a lounge, tack room, hot water in the wash stalls, all the supplement feeding you can want and changing of boots or blankets between turnout and being in the stall. The farm hosts clinics and has four ESDCTA certified in-house shows a year.

I'm not sure how much full training board is. Lessons run about $40-50, $80 if you are riding with a big name trainer in the area. And because of the location this includes everyone from Sally Cousins to Phillip Dutton.


Shoes
A barefoot trim will run you $40, and I pay $80 for front shoes for Runkle. I'm assuming one day he'll need hinds and that'll cost me $160. If you get pads or any other fancy-ness it's $180 or more. I freakin' love my farrier. He's very patient with Runkle trying to lay down during his farrier appointments. He's not the main 'barn' farrier who comes on a schedule and does all the horses but I like him better as he's more reasonably priced, will come out after work for me which is awesome because I like asking a million questions about every nick and divot in Runkle's feet. And he will also tack shoes back on when Runkle throws them. Wrote if and deleted it. No if's about it. 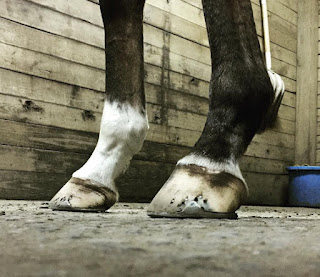 Riding Demographic
Every time I think of moving I change my mind because anywhere I'd want to move (cough Seattle cough) is nowhere near as good riding wise, particularly for eventing. Within a two hour drive I can hit four or five different recognized events, with plenty of them running divisions all the way up to Advanced. That's how I was able to jump judge so much this season. And that's not even including the plethora of unrecognized events all over the place. Flora Lea may not be the world's fanciest venue, but it's only fifteen minutes away and they hold four or five events a year.

If you're willing to drive a little farther you can add in all the big events in Maryland and VA, including Loch Moy and the Virginia Horse Park. I've never gone farther than four hours for an event, and only stayed overnight at one once. Even the drive to Aiken isn't too bad, it's a fourteen or so hour trip straight down mostly highways.

And it isn't just eventing. Back when I did the jumpers and equitation this was the hot spot to be as well. It's not coincidence that so many Olympians make their home around here. There is a huge 4H scene that I used to be a part of as well, and I'm not too far from the Cowtown Rodeo which is the longest running rodeo in the US.

So yeah. There are some horses here.

Now I feel like I've thoroughly convinced myself to never leave the area so thanks for that. This is the loop I get constantly stuck in every time I get frustrated and think I want to up and move. Because... where else would I go?
Labels: blog hop