10 December Questions that You're Getting Even Though It's Not December

Things have been slow. Kinda. I really need to do an update on Runkle's rehab progress but I have absolutely 0 media and I'd really like to get at least some pictures of him back under saddle. I also would like to show off some of the goods from Christmas but again, I have no pictures.

Do you know how hard it is to take nice pictures in a barn at night? It's impossible. I don't have that kind of equipment. I don't think anyone does.

So you get this instead.


Does your horse need shoes? No, not really. He has fronts on because we were jumping more but he was barefoot all last winter and he was fine. He actually has great feet. I thought about pulling them again this fall but with all of his shenanigans with his leg I decided I didn't really want to screw with anything while I was dealing with Godzilla and whatever else the piss his leg was doing.

What do you think of the barefoot vs shoes debate? Some horses have really shitty feet, and need shoes. Some don't. I think if your horse is okay barefoot you should leave it barefoot. They'll tell you when they need shoes. As for the debate, I think people get really ridiculously one sided and refuse to consider the other side and I think that's a dumb idea.

Favorite season for riding? Gotta go with L on this one, absolutely fall. It's not as muddy as spring, and the weather is still warm and the horses can still go out at night, but it's not so hot that everyone's lolloping along like slugs. Also the trees are so pretty and it smells nice out :)

How many shows do you think you’ve gone to? I have no idea. Probably 50? 60? And I'm assuming you mean as a rider, because if you're including as a spectator/volunteer it's probably a hundred.

Do you consider yourself a good rider? Hah, this has kind of been a topic of discussion with me lately. I hate saying I am, because I really feel like I have so much more to learn, but I think I know what I'm doing. So sure, I'm good.

How experienced do you think someone needs to be to own a horse? I think you can be a total n00b as long as you have someone experienced helping you. I owned a horse briefly (I'm talking months) and I definitely did not know enough. I feel bad because I don't think I exactly did right by him but I didn't always know any better.

Have you ever gotten into a fight with your trainer? I have gotten in at least one fight with anyone I've ever ridden with, and it's always over something stupid and ends in tears and then we move on. 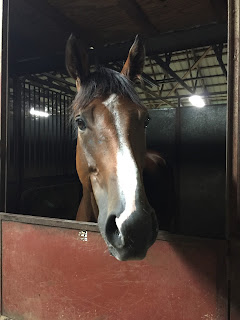 Does anyone in your family ride? My sister used to ride, and she knows how, but I became a grumpy teenager when I was thirteen or fourteen and got mad that she was doing my thing. In retrospect that's so dumb, because we could've ridden together and it would've been amazing.

My parents are also really sweet in that they try and ride at every opportunity because they want so desperately to understand what the hell my problem is and why I'm so obsessed with it. But to be honest my mom is terrified of horses (probably rightly so) and my dad has really tight hips so it's very uncomfortable for him. But it means a lot to me that they try!

If you could ride any horse in the world, which one would it be? why?


Of course. Because YOU KNOW WHY.

But I'd also love to ride a steeplechase horse over hurdles and in all honesty I'd love to ride a pure dressage horse. I don't really care who, but I'd love to learn to do some high level dressage work on a master. Tempi changes anyone???
Labels: 10 questions